Yates Electrical Services started in early 2004, formed by Riverland local Mark Yates. From humble beginnings based out of a small office in the back of a workshop barely large enough to crack a whip, Mark has forged a successful business into what is now one of Australia's most innovative and progressive companies operating in the Renewable Energy sector.

”I was actually offered a – well they called it a scholarship, but really, it was an apprenticeship with a silver lining. It was offered through the College I went to in Adelaide.”

It was a time when Mark will tell you that he wasn’t really sure what he wanted to do in life, so gaining a trade in the interim made sense. If you were to ask him today, he will tell you (with tongue firmly in cheek) that he’s still unsure, and he’s just running this business until he figures out what he wants to do.

Yet, his passion to see his business succeed could not be understated, and the journey ahead would not be without its share of turmoil.

”The people I worked for definitely instilled the idea that working for myself was what I wanted to be doing, so the day I finished my apprenticeship was the day I registered to become an electrical contractor.”

Mark recognised early that for his business to prosper, he needed to be involved in High Voltage markets. Over the next few years, Mark and his growing team of electricians had the opportunity to work on some of the most exciting renewable energy projects which were being constructed around Australia.

”I remember seeing how a site operated, and looking at management thinking ‘I could do that’, so I decided to tender for our first job - a substation construction.” Mark reminisces about the meeting which changed the direction of his business, “I was driving this old van, it was terrible. Most days we had to roll start it, and if it started first time it was like Christmas. My meeting was with Consolidated Power Projects, and I was so terrified that they would see my van that I parked it about 500 meters up the street.”

”I recall that once the meeting finished, they told me they would like to accept my proposal, we shook hands, I was almost speechless. I remember they then walked me out, I was mortified they would look at my van and think ‘what have we done?’, but I just decided to keep walking and not look back.

”I think that’s how I’ve always run my business, looking to the future and not concerning myself with the past too much. There’s no point worrying about things you can’t change.”

A positive attitude for a business owner, yet an attitude which was not hard won. In 2008, while on his honeymoon, Mark received an email – one of those emails every business owner dreads – the company he had been contracting to for his residential solar installations had gone into administration, with Yates Electrical Services owed a significant six figure sum.

”I basically had 2 options before me, I could either lay down and die, or I could brush myself off and find a way forward. We decided to reach out to our local customers who had already paid their 10% deposit and tell them that we would honour their deposit and complete their installations. The support we received over the next couple of years from our local community was incredible, and we consequently installed over 1,000 residential solar systems throughout the Riverland.” 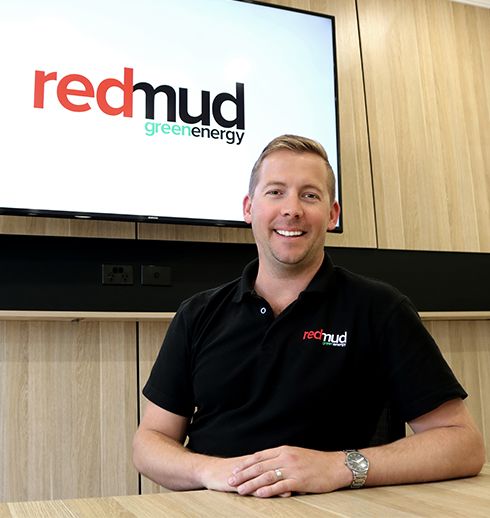 Starting as an electrical contractor in 2004, Mark now leads a team of over 40 electricians, tradespeople and apprentices, working on various High Voltage Renewable Energy projects all over the country. Yet the latest chapter in the story of Yates Electrical Services would not come to light until 2016 when Mark decided to begin studying the complex inner-workings of the National Electricity Market.

”The fact that in the Riverland we have gone through significant drought, means there was a lot of vacant and underutilised land in the area. A lot of farmers sold off their water entitlements during the drought, effectively rendering their farming land useless, so there was a real opportunity to look at ways that we could reactivate that land, hence how Redmud Green Energy was born.”

Redmud Green Energy, the project which aims to work with land-owners in rural communities to reduce their reliance on the volatile primary produce markets while providing them supplementary income streams, has experienced overwhelming support from rural communities since the prototype site went live in March 2016. The goal was to have 22 solar farms operational by the end of 2017, and now, mid-2018, we have over 30 farms generating, with another 20 in various stages of development, and a list of interested land-owners who we are just now starting to reach out to.

Over the past 3 years, I’ve had the privilege of working next to Mark out of the Yates Electrical Services offices in Paringa. Through that time I’ve taken inspiration from him as both a business owner and on a personal level, he is methodical as an operator and supportive as a friend. His success is not derived from a desire to make money, but rather from a simple wish to see everyone with which he surrounds himself provided for and content. It’s a trait I’ve so rarely encountered in my travels.

Suffice to say, Yates Electrical Services definitely have some interesting times ahead, and the future of the Riverland based business that started with one man 14 years ago is equally as exciting as its journey.